The Edmonton Oilers have done this before. They do a lot of the same things over and over again, expecting a different result.

On this week’s podcast, we’re all scratching our heads trying to figure out why the Edmonton Oilers would hire a semi-retired Ken Hitchcock to turn things around in the self-proclaimed City Of Champions?

Last week, the Oilers fired head coach Todd McLellan and brought in recently retired Ken Hitchcock to revitalize the team and do everything in his power to get the team to the playoffs.

If Hitchcock doesn’t achieve this, chances are Oilers’ GM Peter Chiarelli will be out of work this spring.

But why Ken Hitchcock? By all accounts, he is a storied head coach with a serious reputation for being a hardass, a ‘dead puck’ era relic with a bang and crash defensive approach to the game, and a coach who most of his former players publicly admit they hated playing for the guy. Anytime Ken Hitchcock gets hired in the league, the immediate response is “well, he’s a real stickler who will give his players actual tests to write, players hate playing for him… but he won that cup in Dallas in ’99 and had some amazing years with the Kamloops Blazers in the WHL”.

He is coasting on his reputation and his glory years.

You’d think they would have hired him in Los Angeles, as those are generally the types of players they sign or trade for.

In the most primitive of hockey mindsets, which seems like how the Oilers’ front office thinks, the Oilers need to be more defensive, more responsible, have a better penalty kill and allow fewer goals against. So bring in Hitch! He’s Mr. Defense! He’ll get the Oilers playing slower and tougher. Except, that style of coaching and approach to the game fell out of style with the centre red line and clutch ‘n grab hockey.

He wasn’t able to apply that approach in Dallas, where he had more offensive weapons than he knew what to do with. He wasn’t able to get the St. Louis Blues in the playoffs, a team lauded for their terrifying top line, huge defensemen, and a bottom six that was built for the postseason! So how is it going to work in a ramshackle, scotch taped Edmonton Oilers?

The hard-nosed, no-nonsense approach didn’t seem to work with Todd McLellan nor did it resonate with this troubled Oilers roster. If something didn’t work the first time, don’t do it again to an even more extreme the second time!

Hitchcock is going to waste another year of Connor McDavid’s prime forcing him to play huge minutes and an increased emphasis on good ol’ fashioned two-hundred-foot hockey. He will increase the minutes of big hulking bruisers like Milan Lucic, Zack Kassian and Kyle Brodziak and generally just accomplish nothing overall. 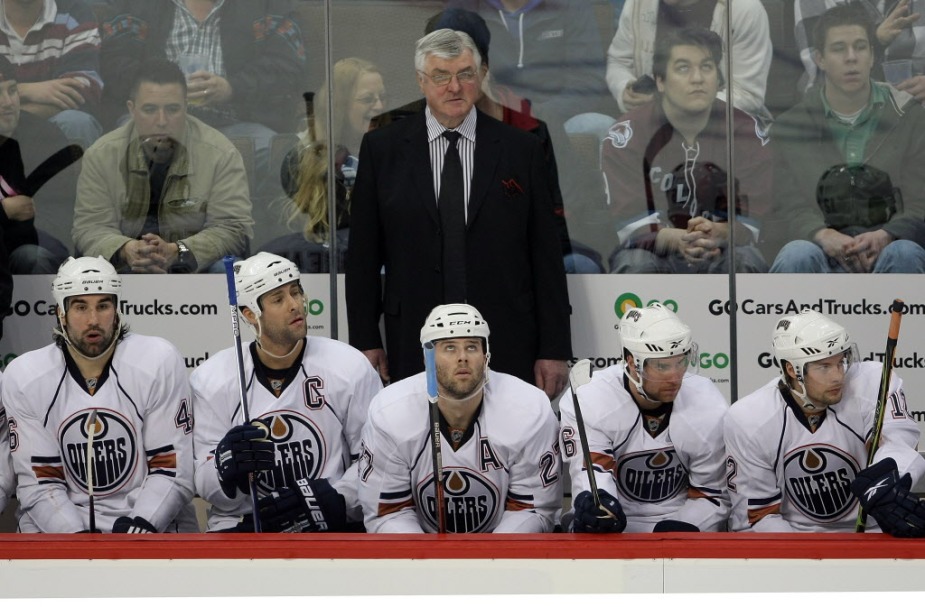 Pat Quinn served as the head coach of the Edmonton Oilers for the 2009/10 season. Photo credit: Doug Pensinger – Getty Images

It’s a move in the wrong direction. But this is Edmonton. They have been doing this for twelve years. Remember when they brought in semi-retired Pat Quinn to coach the young upstart Oilers and their impressionable prospects in the 2009/10 season? It didn’t work at all. Listen, we all love and respect Pat Quinn, but coaching at the NHL level seemed to have passed him by. He was unable to resonate with the younger Oilers the way he was successfully able to when he coached Team Canada to a gold medal at the 2009 World Juniors in Ottawa.

The Oilers’ ownership and front office have a long-standing history of short-sighted, close-minded thinking towards the game. Have they ever made a decision based on the big picture or appeared ever to have a long-term plan? No. It just seems like they make decisions based on what they need today, or needed yesterday.

The hiring of Ken Hitchcock is the latest in a long, long list of questionable and poorly thought out hockey decisions made by the Oilers.

The way things are going, Peter Chiarelli won’t be making them that much longer in the (self-proclaimed) City of Champions.

Mike Smith's roles and performances consistently win over both critics and NHL referees! 🏆🎞🎥
We are BACK next Monday (Oct 4).
Just had our PON preseason meeting. Arash ate that entire container of guacamole straight! 🥑
NHL'22 cover reveal
It's REALLY concerning!!
🤔🤷🏼‍♂️🤷🏻‍♂️💸💸💸💸💸🤑