The Tampa Bay Lightning are probably going to win the Stanley Cup this year. In a season that reminds me of the Washington Capitals a year prior, this is a total under the radar season for the Bolts. All the tell-tale signs are there. Don’t say I didn’t warn you!

Nobody is talking about them

The only things people are talking about this season are as follows: The Maple Leafs’ offensive juggernaut, every shift Connor McDavid plays, Patrik Laine and the Winnipeg Jets’ expected deep run in the playoffs. Minor storylines include Elias Pettersson in Vancouver, Erik Karlsson’s stint in San Jose and the tire fire in Ottawa that caused that trade. Nobody is talking about the Tampa Bay Lightning.

Tampa Bay is first in the eastern conference. They are the highest scoring team in the league, have a top ten power play and currently possess the second best penalty kill behind the Arizona Coyotes. They’re winning almost every night and it seemingly goes unnoticed.

They have incredibly balanced scoring through the top six with guys like Brayden Point, Nikita Kucherov and Yanni Gourde producing over a point a game each.

They have arguably the best goaltender in the NHL right now in Andrei Vasilevskiy who is absurdly consistent and therefore reliable. He won 44 games last year! FORTY FOUR! And he did it within a manageable and healthy workload of sixty five games played. There aren’t too many fears of him going down with a Ben Bishop or Carey Price-like injury due to being overworked.

Oh. And that defense of theirs.

It’s deep. Like an Olympic sized swimming pool (I don’t know how deep one of those actually is but it looks VERY deep).

Even with Victor Hedman on the injured reserve (but returning soon!), they are stacked in the back. They’ve got all the good ex-Rangers, Ryan McDonagh and Dan Girardi. There’s also Anton Stralman and Braydon Coburn. And of course, as the clear-cut winners of the Jonathan Drouin trade, Tampa Bay has Mikhail Sergachev, who is turning into everything PK Subban was in Montreal. But of course, Montreal needs to trade anything and anyone that reminds them of PK Subban, thus the deal was made. 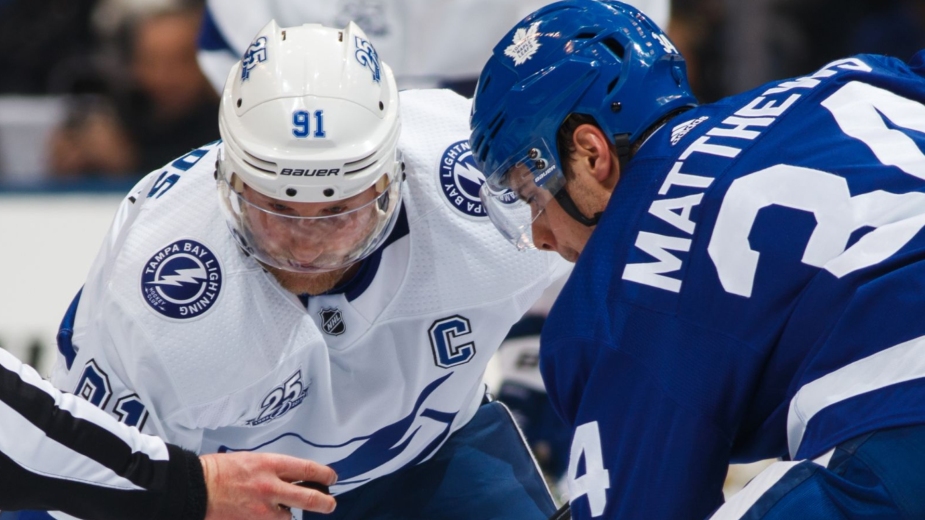 I didn’t even list Steven Stamkos in that last section!! Did you even notice him as a glaring omission? Probably not.

Stammer is living comfortably in the land of scoring depth. He sits fourth in team scoring, with a reasonable six goals and goals assists.  Nikita Kucherov and himself make up one of the deadliest tandems in the NHL right now.

But Steven Stamkos has garnered the unfair status of being injury prone. He missed 66 games in 2016/17 due to Thoracic Outlet Syndrome. He missed most of the 2013/14 season after suffering a broken tibia and missed the 2016 Stanley Cup playoffs due to blood clots. Is he injury prone? No. Has he had some bad luck at the worst possible time? Absolutely.

With a full healthy season under his belt last year and the scoring depth of this season’s  team, the probability is high for Stamkos’ to make another run to the Stanley Cup like he did in 2015.

But Steven appears to be somewhat of an afterthought right now. With all the young talent infiltrating the league each season, people regularly seem to overlook Stamkos.

All the buzz in the NHL right now is Auston Matthews, Connor McDavid, a bunch of guys who either play on the Leafs, one guy who’s holding out on the Leafs, the San Jose Sharks and a bunch of young kids sprinkled throughout the league. Nobody really talks about Steven Stamkos anymore.

As mentioned, I am reminded of the last few seasons with Alex Ovechkin and the Washington Capitals. As younger and flashier players entered the league, Ovi and the Caps seemed like a distant memory.  In my mind, it made Ovechkin play with a chip on his shoulder. If fans and media don’t think he’s relevant anymore, he’s going to prove you wrong.

Much like Alex Ovechkin and the Washington Capitals, there was always a level of doubt in their ability to win when it mattered most.

Nobody expects them to win the big one

Steven Stamkos and the Tampa Bay Lightning have been close, many times in fact. Eastern Conference finals and a Stanley Cup final appearance in 2015. The Bolts have had such impressive teams on paper and in the standings for years now.  But you just assume bad luck, a bad injury or an inability to win the big game will be the yearly downfall for Tampa Bay.

I just don’t get that sense this year.

A team of players in their prime on a well-assembled, deep roster and a proud coach who wants to win.  A team you wrote off in October as great on paper but couldn’t stay healthy or win when it mattered most. The same negative mindset fans and media had on Ovi and the Caps, they have on Stamkos and the Bolts. “They’re good, but I mean, they won’t win it.”

Despite being arguably the best team in the league, Tampa Bay will fly under the radar all season. They’ll wind up in the eastern conference championship and fans around the world will remember, “Oh right, Steven Stamkos is great a hockey”.

He is. But so is the whole team!