On this week’s podcast, we review the ten NHL teams you should pay attention to — and the Calgary Flames are one of those teams!

At one point in my life, it might have pained me to say this, but I’m really high on the Calgary Flames this year.

Growing up a Vancouver Canucks fan, I was taught to resent the boys from Cowtown and their loudmouth, troublemaking, mascot dog no matter how much Jarome Iginla won us over. I spent part of my childhood in Calgary, a Canucks fan on enemy territory. I regularly argued the merits of Trevor Linden and Pavel Bure over the likes of Theo Fleury and Cory Stillman on the playground at recess only to have it fall on deaf ears. Those years are long past, and now I can happily announce to all of you, that the Calgary Flames look great this year and they’re going to show up as one hell of an improvement.

Let’s start with my favourite part of the team, the defense!

Despite trading away last season’s leading goal scoring defenseman, Dougie Hamilton, their top four defensemen are still tremendous. Travis Hamonic came over for a big price in a trade with the Islanders last season, and he’s in his prime. Noah Hanifin is ready to make an impact on a legitimate team in a big market following a couple of years of purgatory in North Carolina. There will be a lot of eyes on Noah Hanifin to see if he can live up to his hype AND Dougie’s offensive production last season, but last season the offensive production of the Flames’ forwards was a much bigger concern.

Mark Giordano became one of my favourite defenseman in the league over the past few years. A grizzled vet who knew his worth, he refused to sign a lowball deal with the Flames and took his talents to the KHL before finally returning before the 2008/09 season. He is a player I love to watch quarterback a power play, he’s offensively and defensively sound and a fantastic leader, serving as Flames captain since the 2013/14 season.

Last season the Flames couldn’t score goals. Especially their bottom six. It took seventeen games for a player from their bottom six forwards to score a goal. This is a huge problem in an NHL that’s so fast and competitive you need to have offensive production from all four lines.  Enter James Neal.

James Neal is the real deal. He scores goals and gets paid to score goals. He doesn’t really do much else. The 31-year-old put 25 goals up last season for Vegas. He signed with Calgary in the summer for a five-year, $28.5 million contract ($5.75 mil AAV). It’s a signing I really like, and it makes sense to bring James Neal in for scoring depth.

Sean Monohan lead the team in scoring with 31 goals last season while Johnny Gaudreau and Matthew Tkachuk were close behind, each with 24. Consequently, the primary offensive expectations will be placed on the top six guys and leaves Neal to take it easy. He can focus on scoring on the second power-play unit and in those bottom six minutes. Sure it’s a price to pay for depth scoring, but it gives the Flames the depth that teams clamor for all season. James Neal can slot in on the first or second line if needed, and playing on the third line makes the Flames that much harder to defend against.

Matthew Tkachuk is evolving into the player everyone thought he would (and the player Canucks fans hoped he wouldn’t after Vancouver passed on him in the 2016 NHL Draft). Matthew enters his third season in the league and now has a more significant role on the team, more responsibility and the entire league is taking notice. This week the Flames announced the 20-year-old Tkachuk would be an assistant captain on the team, an impressive feat for a player so young to become a captain or leader on an NHL team. I personally love his game. He has consistent offensive production (49ish points his first two seasons) and an ability to get under his opponents’ skin and agitate them in a way that could only be passed down his father, Big Keith. Thankfully Walt didn’t pass down his diet and training regimen to the kid. This aspect of his game made Michael Ferland expendable to Carolina to acquire Elias Lindholm, who was playing on the top line this preseason and given the Flames even more depth.  It just seems like with the growth and development of Matthew Tkachuk, the Flames can put their trust in him and rely on him to play a bigger role on and off the ice.

Also, who doesn’t love the ongoing feud between Matthew Tkachuk and Drew Doughty? Last season, every Calgary Flames vs. Los Angeles Kings games became appointment viewing to see what would happen next between Doughty and Tkachuk. Those two have arguably the best feud in the NHL today, and I am eagerly awaiting the first Kings/Flames game on Saturday, November 10th!

One thing I will not gush over or praise is the Cowtown goaltending. While they have cultivated and assembled an impressive offensive and defensive core, the same can not be said for their goaltending tandem. Any success the Calgary Flames do this season will be in spite of Mike Smith and some guy named David Rittich. 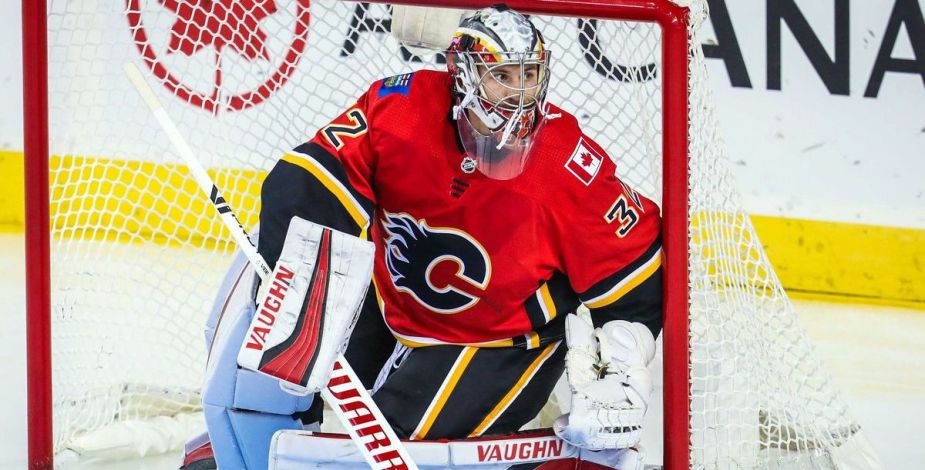 I’ve never cared for Mike Smith. A big lanky hothead (no pun intended) who seemed to be injured anytime his team needed him most. He’s not getting any younger either. 36-years-old and missed a stretch of last season dealing with a groin injury. With his age and injury history, you have to think he will have a lighter workload this year, and if so, is David Rittich going to take that next step in his development? It seems like Flames fans and management are wishful thinkers.

And finally, the Calgary Flames have a new coach! Angry Bill Peters, who spent the past four seasons in Carolina as head coach of the Hurricanes. During his tenure there, the Hurricanes played zero playoff games, and he was involved in one hell of a goalie controversy with former Vancouver Canucks goalie Eddie Lack.

I am skeptical about the Bill Peters hiring. For this team to make the playoffs, the Flames will need to respond positively to Peters’ famously abrasive coaching style. Even if they do respond well to their new head coach, David Rittich and the aging and frequently injured Mike Smith will have to take huge steps forward.

Even with my skepticism, this is an impressive team. They will bounce back from last year, and in a division as weak as the Pacific Division, I predict a playoff appearance from the boys in Cowtown.

Flames fans, please behave yourselves on the Red Mile!

Ugly #Canucks loss tonight... that Stillman/Myers combo didn't seem like the best idea either. Where was Kyle Burroughs🤔
The #Canucks had a successful road trip and have begun playing more complete games with confidence ... but there's a long way to go.
The #NJDevils are too good. Someone needs to do SOMETHING!!!
That 3rd period was chaos...
are you a rookie goalie or an AHL call up? If you're playing the #Canucks, you're gonna have a good night!
Anyone else tired of these Jim Rutherford re-runs?