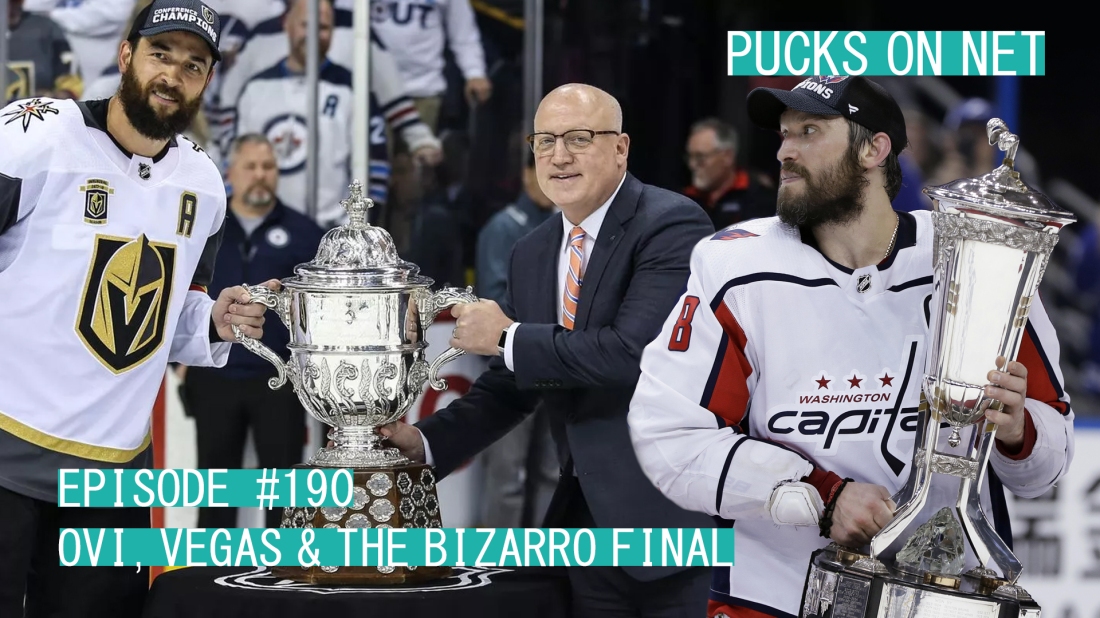 The Stanley Cup Final is here. It features an expansion team, Alex Ovechkin and it starts on a Monday night… what the hell is going on here?!

A full bench this week at the palatial estate as Ryan, Dave, P Mac and Geeta gather to get you geared up for the Stanley Cup Final. They discuss a rested Vegas squad and a Washington Capitals team running red hot with a goalie putting up back to back shutouts. They look at the big trades Tampa made at the deadline and whether that affected their playoff run. And they look at Alex Ovechkin’s Superman like performances in Game 6 and 7.

They also discuss the Noah Hanifin/Vancouver Canucks rumours swirling thanks to a certain blog featuring thirty or so thoughts. Can the All-Star defenceman be dealt to Vancouver? Do they have enough assets to make it happen? Or will they give up too many key pieces of their rebuild.

They talk about what is happening in Toronto. Kyle Dubas is the general manager, Laurence Gilman his assistant and Lou Lamoriello is on Long Island, doing everything in his power to keep John Tavares in Islanders’ orange by July 1st.

Finally, they discuss the potential of Ryan Kesler missing a season, the video game addiction controversy and Evander Kane’s big money deal in the Bay Area. Is it a gamble? Or what you need to offer a player of that calibre after an impressive yet short stint with San Jose?

Listen to this week’s 5 Minutes for Paying for our $5+ Patreon backers. They discuss Shitty Beatles Softball, the table in Paul’s car and that 30 year old guy forced to move out by his parents!

🎵🎶Don't know what you got 'til it's gone🎸
Okay. Let's try this again...
You can actually pinpoint the second @arashie's heart rips in half!
THIS FEELS WEIRD!!
Our round two #StanleyCup playoffs predictions. All three of us batted .500 in round one.
"We need to stop getting really excited about the draft lottery"