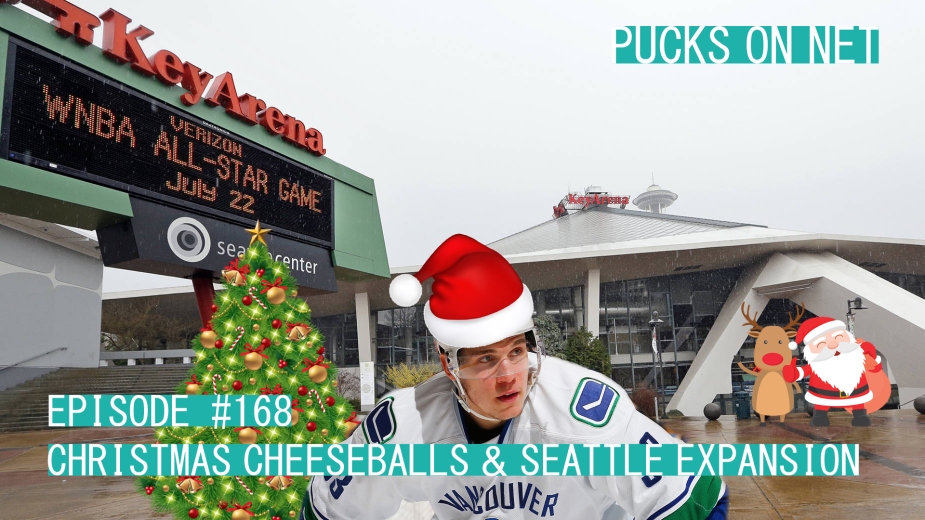 It’s the 5th Annual Pucks on net Christmas Party! The PON studios are full of friends and family as we gather to celebrate the season, be merry and discuss hockey in a room full of loud people on their third drinks!

A full bench this week as Geeta, P Mac Dave and Ryan discuss the very real possibility of NHL expansion to Seattle. Similar to Vegas’ quest to get the 31st NHL team, Seattle will soon launch an official un-official season ticket drive, come up with $650 million in a week or two and finally have a drivable rival for the Vancouver Canucks.

Speaking of the Canucks, they discuss Bo Horvat’s terrible injury, his timeline to return and how the team plans to fill the void of him out of the line up!

And then as per usual on our Christmas party shows, friends and family come on, share some stories and a few laughs and for the first time in it’s existence, people who actually listen to the show attended!

A VERY fun show to say the least.

Right now on Patreon for only a $1 monthly pledge, you can hear the all girls exclusive version of 5 Minutes For Paying “Broads on net” as Geeta leads her all woman bench of Sam, Stephanie and Nikki through an unscripted random segment as the clock struck midnight of the PON Christmas Party. They’re so confident this segment will be a hit, they lowered the price point since so many people will sign up for Patreon just to listen to it!

We had a lot of fun on the podcast last night.
📲➡️➡️
Now available to our $5+ monthly @patreon backers:
We were asked this question on our new podcast:
You can watch our new episode in video and in living colour on our @patreon!
"That is some green bubble bullshit!" - @geetanjalired